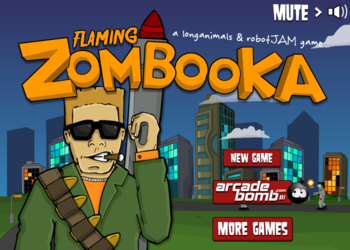 Flaming Zombooka is a series of Adobe Flash puzzle games by Turbo Nuke in which your goal is killing all zombies within a level without killing humans if they're present. This is usually done by shooting them with your bazooka, but sometimes it's necessary to use other traps in the level on them.

The original was released in April 2010. It laid the groundwork for the series, but it was still simplistic (see the Early-Installment Weirdness entry).

Flaming Zombooka 2 was released in November 2010 with a level pack in March 2011. It streamlined the gameplay by giving the player infinite ammo (though it's not like levels can't be made unwinnable) and adding a star system to encourage more efficient ways to beat levels, improved the artstyle significantly, and added several weapons to play with.

Flaming Zombooka 3 was released in November 2011. This game has a Carnival theme, with zombie clowns instead of superzombies and many attractions. You also rescue other performers who join as playable characters with their weapons (replacing the previous game's alternate weapon system) and can be switched between just by clicking them.