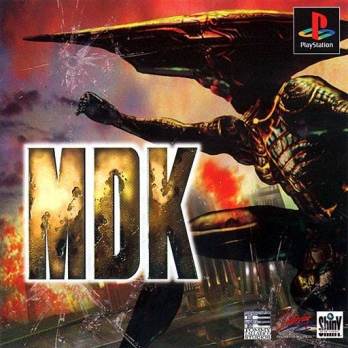 MDK is a third-person shooter game developed by Shiny Entertainment and released in 1997 by Playmates Interactive Entertainment in North America and Interplay Entertainment in Europe for the PC, Macintosh, and subsequently PlayStation. It was one of the first PC games to require a Pentium or equivalent processor, and did not initially have a GPU requirement. The game soundtrack, composed by Tommy Tallarico, was also separately released.
Advertisement:

The game tells the story of its human protagonist, Kurt Hectic, and his attempts to rescue Earth from an alien invasion of gigantic strip mining city-vehicles named 'Minecrawlers', that are not only removing all of earth's natural resources but are also flattening any people and cities that get in their way. The game combined action with a sense of humour. It featured a "sniper mode" that allowed the player to zoom in on enemy targets.

A sequel, MDK2 was developed by BioWare and released by Interplay for the PC and Sega Dreamcast in 2000, and later for the PlayStation 2 (titled MDK 2: Armageddon) in 2001. An enhanced HD remake of MDK2 was released at the end of July 2012.