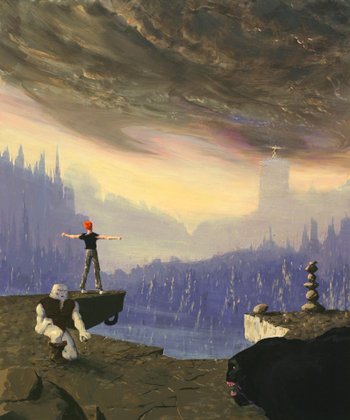 Another World is a Cinematic Platform Game developed by Eric Chahi for Delphine Software. The title of the game was changed to Out of This World when it was released in America by Interplay Productions, to avoid confusion with the popular NBC Soap Opera, Another World. note  Coincidentally, a syndicated Fantastic Comedy titled Out of This World (1987) started airing the same time the game was released. In Japan, the game is known as Outer World.

To say the game was innovative was an understatement. Chahi himself wrote a polygon routine that would allow the graphics to be composed of vector outlines — which would take up less space than normal sprite graphics. Like Jordan Mechner did with Prince of Persia, Chahi also used video recordings of his own brother to create rotoscoped animations for the project. The result was an epic, cinematic masterpiece which told a story without the use of dialogue, voice work or screen text, and with cutscenes that led from one part of the story to the next. Controlling the player character was done via two buttons, with the player character performing a wide variety of different tasks depending on his location, speed, and movement.

The story itself concerns a hapless, adventurous, and athletic young physicist named Lester Knight Chaykin, whose particle accelerator experiment gets zapped by lightning one evening, sending him to a hostile alien world. There, Lester gets captured by an advanced race of huge warlike humanoids, who send him to an underground prison colony. With the help of a fellow prisoner, who becomes his "Buddy," Lester breaks out. He then spends the rest of the game trying to evade recapture and death at the hands of... everything on the planet.

This game is notable, not only for its dramatic storytelling and early Survival Horror roots, but also for being one of the most Nintendo Hard games to come down the pike since Battletoads. The slightest misstep meant death in any number of horribly unspeakable ways. The console versions of the game — such as the SNES port — were made more difficult than the MS-DOS / Apple Macintosh versions (which themselves were more difficult than the original Amiga version), reportedly to give players "more value for their money." (Although it may give some players a strong desire to throw their keyboard/joypad at their TV.)

A sequel, Heart of the Alien, which switched the roles of Lester and his alien "Buddy", was released in 1994 exclusively for the Sega CD. This sequel was developed by Interplay without Chahi's involvement, though the original game's composer Jean-François Freitas contributed a CD-quality soundtrack.

Chahi eventually created a hi-def port of Another World for Microsoft Windows XP with higher resolutions and better graphics. This version is known as the Collector's Edition and is well worth owning according to some, a blatant money grab according to others (because the first two levels, which are free, are markedly more "updated" than the later levels players must pay for). Mobile ports of this exist (see below).

By the way, here's

an official freeware GBA port (also playable on emulators, of course). There is another one based on the 3DO version, requiring the 3DO game itself in order to play.

complete with achievements! It is also available as digital download for PlayStation 3, PlayStation 4, PlayStation Vita, Xbox One, Nintendo 3DS and Wii U.

A version of the game optimized for both iPhone and iPad is available here,

along with a version for the Android OS obtainable here.

These versions, and the 20th anniversary edition of the PC version, features added difficulty levels (both easier and harder), both the original and remastered graphics (that you can change at any time in-game), an achievement system, and for the mobile versions: A new touch control option on top of the option to use the standard Pad-style controls. The GOG version, while lacking an achievement system, makes up for it with the inclusion of the full manual, making of Another World, development diary, HD wallpapers, technical handbook, the install file for the 15th anniversary edition, and the soundtrack from the Sega CD version of the game.

Alternative Title(s): Out Of This World