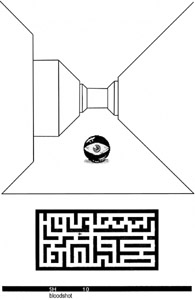 Maze War is the Ur-Example of the First-Person Shooter, written by Steve Colley and Howard Palmer on Imlac PDS-1 minicomputers at NASA's Ames Research Center in 1973. It is a Faux First Person 3D, network-based Player Versus Player, realtime FPS. Each player controls a Faceless Eye, wandering around the maze shooting the other players or computer-controlled robots. They also have an overhead view of the maze, showing their location, but not the other players. Players and robots alike could Take Cover! and peek around corners without getting shot. Players scored points for kills. If they were shot, they were deducted some points and transported to a random location in the maze.
Advertisement:

Responsible for a lot of wasted time at Ames, where engineers were supposed to be designing the Space Shuttle. Ames alumnus Greg Thompson took it to the Massachusetts Institute of Technology in 1974, where the robots and a maze editor were added. Later ported to the Xerox Alto workstation, Apple Macintosh, NeXT, and Palm Pilot.