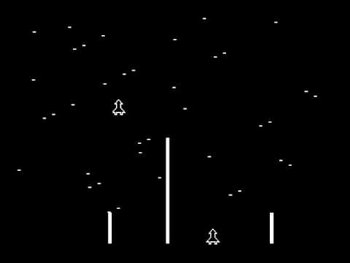 Space Race was Atari’s second game after Pong, and it re-uses the Pong hardware. The paddles have become spaceships, and the ball has become two scrolling asteroid fields. The game didn't sell well and doesn’t have a cultural legacy like Pong, but it did introduce the Death Course mechanic to video games.