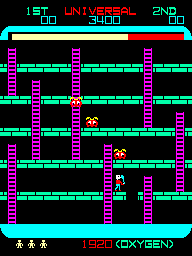 Space Panic is a 1980 Arcade Game by Universal. It has been called the first Platform Game, which is like calling Space Invaders a prototypical Third-Person Shooter. Despite the game's action taking place in Side View, in some ways its mechanics, which do not include jumpingnote Jumping mechanics would not be introduced to the genre until Jumpman came up with the innovation, are closer to Maze Games, particularly Heiankyo Alien.
Advertisement:

Though Space Panic was not widely ported, and is quite primitive by modern standards, it was nevertheless popular enough in its time to inspire clones, which include: