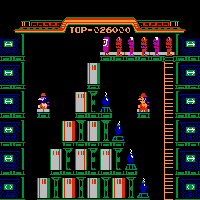 Mario (on the right) prepares to face off against Spike and his minions.
Advertisement:

Nintendo, before making the Mario Bros. "Super" but after having the elder brother square off against Donkey Kong, employed Mario and Luigi in Wrecking Crew, a platform-based Maze Game released for the Nintendo Entertainment System in 1985. It was the first game design job for one Yoshio Sakamoto, kickstarting a prolific career.

In this game, the brothers wield hammers (both the regular kind and the more powerful Golden Hammer), bombs, and falling oil drums as tools for demolishing various buildings. Posed against them is Foreman Spike, who sics Eggplant Men and Gotchawrenches on the Bros. while chasing after them himself. Mario and Luigi must dodge these enemies as they smash apart the demolition sites one wall, pillar, and ladder at a time. Every fourth level, they must race against Spike in a search for a hidden coin for extra points.

Like several other NES games, it was adapted into an arcade game running on the VS. System. However, it was one of the few VS. System games to actually predate the home release, as it contains a 1984 copyright. VS. Wrecking Crew is also quite unlike the NES game, and allows simultaneous multiplayer.

Nintendo released Wrecking Crew '98 in Japan only as one of the last games for the Super Famicom. This was a compilation of the original Wrecking Crew with an all-new competitive Match-Three Game. The story once again sees Spike, this time working for three-month younger Bowser, impeding Mario's demolition job. Foreman Spike himself would also reappear as an unlockable character in Mobile Golf, a Japan-only Game Boy Color entry in the Mario Golf series, and is also set to appear in Illumination Entertainment's Super Mario animated movie set for 2022, where he will be voiced by Sebastian Maniscalco. Later, this game would appear in NES Remix.