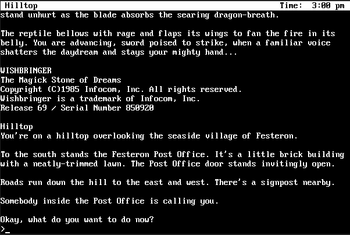 Wishbringer is an Interactive Fiction game published by Infocom in 1985, and set in the same world as the Zork series.
Advertisement:

The game begins with you, a humble postal clerk, being sent to deliver a letter to the proprietor of Ye Olde Magick Shoppe. The letter turns out to be a ransom note: an evil sorceress has kidnapped the proprietor's cat, and wants in return the magical Wishbringer.

The Wishbringer is a magical stone that can perform seven magical actions (each of which can be used once only during the game). It is possible to complete the game without ever using the stone, but careful deployment of the "wishes" can make things much easier.

A comedic novelization of the game was written by Craig Shaw Gardner in 1988.

The novelization provides examples of: