Video Game / Beyond the Titanic 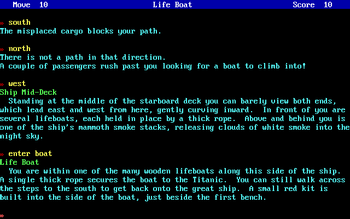 Titanic sinking is only the start of your problems...
Beyond the Titanic is a text adventure game written by Scott Miller for DOS. No images accompany the game's textual descriptions, but a variety of colors are employed to enhance the layout of the game's text. A panel near the top of the screen continuously displays the player's score and number of moves thus far. Also included is the ability to save the game and restore a previously saved game. The game begins on the sinking ship Titanic from which an escape must be sought. Upon doing so the player character is swept away into a mysterious underground complex. The objective of the game is to escape these predicaments and find a way to return home to San Francisco.
Advertisement:

Originally released in 1986 before Miller founded Apogee, the game was later branded and advertised as an Apogee product. Both it and Supernova are the only two games published by Apogee as traditional shareware. Miller permitted the full game to be freely copied and distributed by its users, but they were encouraged to "register" it by sending him a cash donation to compensate him for his effort, to "encourage the author to make new and better games" and to qualify for "telephone support and clues". Although he had hoped that donations accompanying user registrations would become a significant source of revenue, this expectation failed to be realized as most users did not register the game. He concluded that this strategy "was not the way to go." It seemed to him that gamers were "more apt to simply take what they could get for free" and that he needed to introduce a greater incentive to get users to register his games. Miller's experience with Beyond the Titanic and Supernova led him to develop the Apogee model which would become Apogee's standard method of marketing future releases.

Beyond the Titanic was re-released as freeware by Apogee on March 10, 1998. The source code for the game was released under GPL on March 20, 2009.