Video Game / Where in the World Is Carmen Sandiego? 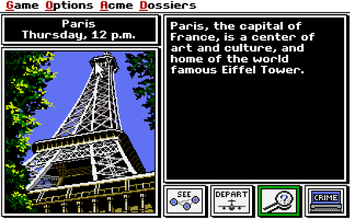 It's 12 o'clock noon in Paris. I've got a week to catch the crook, half a pack of gum, it's Thursday, and I'm wearing sunglasses.
Carmen's gang has pulled another caper! And it's up to you to crack the case...
— The original game's intro
Advertisement:

Where in the World is Carmen Sandiego? is a 1985 educational computer game released by Brøderbund Software and the first entry in the Carmen Sandiego franchise.

In the game, you must travel around the world to pursue and capture Carmen's henchmen and, ultimately, Carmen herself. Each location has witnesses and clues that provide information about the culprit's appearance and location. Your task is to piece together the clues and arrest the correct suspect before the in-game deadline.

The game was remade twice. The first remake was the 1992 deluxe edition, which featured digitized photographs and spoken dialogue. It was followed by the 1996 version, which further updated the graphics and added in Lynne Thigpen as the Chief from the game show of the same name. The 1996 version also reworked the gameplay somewhat, particularly the warrant aspect, and changed the in-game time limit to a fuel limit.

Tropes exclusive to the 1992 version:

Tropes exclusive to the 1996 version:

The crook's arrest is announced with a spinning newspaper

The crook's arrest is announced with a spinning newspaper