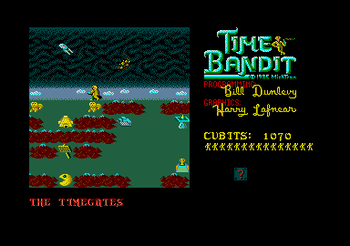 An early view of The Timegates, with Excalibur and Welkin Island at the top, Guardian and Sentinel flanking Cheops' Curse on the left just below the player, Gridville near the center, Major Hazard at center right, Omega Complex at lower right, and Shadowlands and the save/load sign in the lower left.
Time Bandit: The Arcade Adventure is a Three-Quarters View Shoot 'Em Up Maze Game with some Adventure Game elements, originally written for the TRS-80 Model I and ported to the Color Computer and Dragon32. It was expanded and rewritten as one of the early releases for the
Advertisement:
Atari ST, which was by far the most popular release of the game; this version was then ported to the Amiga, and (with some changes due to graphics limitations) to the IBM Personal Computer and Tandy 1000. (Note: this page mostly describes the Atari ST version, unless noted otherwise.)

The player begins in The Timegates, a Hub World with 16 gates to different worlds. Each world has up to 16 levels associated with it, each with 4 major phases (numbered 1 through 4) with up to four sub-levels per phase (A through D). Sub-levels are typically the same basic level, but mirrored across one or both axes. The player's goal is to collect the six Great Artifacts, available in phase four of some worlds, usually in 4D.

While many worlds are just about blasting enemies, several provide adventure-type puzzles, some even having basic verb-noun text adventures.

The 16 timegates are loosely grouped into six areas, with all but one area having three gates in it. The areas are:

Not to be confused with Time Bandits.

In 2010, over 20 years after MichTron went out of business, Harry Lafnear (one of the game's authors), published The Timelord's Handbook as a print-on-demand book detailing the creation of the game, providing an updated manual, and giving both gentle clues and explicit walkthroughs for the adventure games.

Tropes in Time Bandit include: