Western Animation / Where on Earth Is Carmen Sandiego? 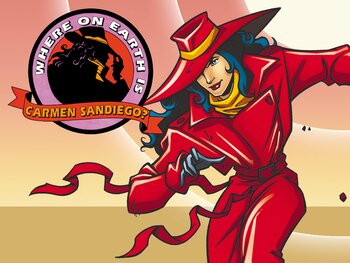 Where on Earth can she be?
"Is there no one on Earth who can catch Carmen Sandiego?"
—Scotland Yard Chief, "A Higher Calling"
Advertisement:

In this series, Brother–Sister Team Zack (Scott Menville) and Ivy (Jennifer Hale) track Carmen (Rita Moreno), who gradually becomes more and more of a Friendly Enemy than she ever was in the computer games. Earth seems to be set in an Alternate Continuity in relation to the rest of the series, although Brøderbund did include some characters from it (Zack, Ivy, and the Chief) in Carmen Sandiego: Junior Detective Edition.

A character sheet is currently in the works.

Where on Earth Is Carmen Sandiego? provides examples of the following tropes: