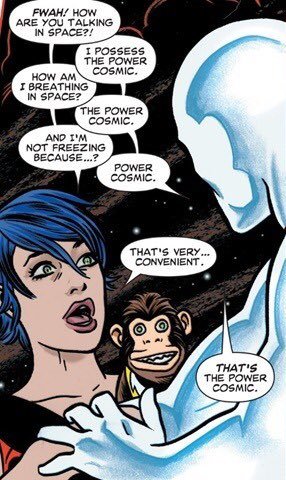 Now that that's out of the way, let's move on!
Nick: Cigarettes in space? But wouldn't they blow up in an all-oxygen environment?
Jeff: ...Probably. But that's an easy fix! One line of dialogue. "Thank God we invented the, you know, whatever device."
— Thank You for Smoking (discussing Product Placement in a Sci-Fi movie)
Advertisement:

A Hand Wave (also memetically called "Scotch Tape") is any explanation involving the Backstory, a retcon, or a use of phlebotinum, which is noteworthy for its lack of detail or focus. The name comes from academia and techy-land, where a person explaining a process on a whiteboard gets to a part that is not well defined or important so just waves their hand around to indicate that Stuff Happens, then moves on to the important goodies. It could also describe the motion one might use to brush aside questions or objections.

A handwave may or may not be an example of bad writing, depending on how it is done. Some examples may be clumsy attempts at plugging up plot holes, but others might elegantly avoid bogging down the narrative with trivial details that aren't necessary to achieve a Willing Suspension of Disbelief. They can also be funny and intriguing in and of themselves.

The Watson is often a valuable source of hand waves. In Science Fiction shows, a hand wave is usually conducted with technobabble. In fact, an alternate name for Phlebotinum is Handwavium. In the industry, the vague and generic direction given by management to actors, designers, editors and so on is sometimes known as "hand waving", as it is frequently accompanied by a lot of gesturing.

May take advantage of the MST3K Mantra. Often related to an Unexplained Recovery. Compare Lampshade Hanging, where an implausible plot element is discussed but not explained. Contrast Voodoo Shark, which is an attempted hand wave that makes less sense than just letting the Fridge Logic stand on its own. In narrative games, an Obvious Rule Patch is often accompanied by an explanatory hand wave. See also A Wizard Did It.

with the caption, "I think you should be more explicit here in step 2."