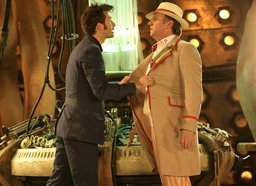 Ah, yes: fifteen!
"Hey, I'm the Doctor! I can save the universe with a kettle and some string and look at me, I'm wearing a vegetable!"
— Tenth Doctor
Advertisement:

The one with Belgium.

The Tenth Doctor and the Fifth Doctor meet in a special taking place in between "Last of the Time Lords" at the end of Series 3 and "Voyage of the Damned" at the beginning of Series 4. You have been warned: it would most likely be quicker just to watch the episode

, seeing as it's only 7 minutes long, than to read the following recap. As well as YouTube, it can also be found on the Series 4 DVD and the Season 19 Blu-ray box set.

The episode begins with a recap of the end of "Last of the Time Lords", with Martha leaving and the Tenth Doctor indulging in one of his current favourite ways to pass the time: staring into space in a state of maudlinness.

He eventually snaps out of it and potters around the console, but when he pulls the take-off lever everything explodes and sends the Doctor flying. The camera briefly turns upside to stress how serious this really is. There's a cool little effect with echoes of the Doctor following around what he's doing. When everything settles down the Doctor demands to know what all that was about, and begins checking the instruments, absentmindedly apologizing to the Fifth Doctor, who is also checking the console, when the two bump into each other... wait a sec.

Five testily demands to know who Ten is. Ten, on the other hand, is utterly thrilled, despite his own acknowledgement that it's "totally wrong, big emergency, universe goes bang in five minutes but... brilliant!" Five is obviously not impressed by Ten's prattling, announces "I'm the Doctor!" and demands to know who Ten is again. Ten, who is clearly experiencing an intense fangasm (he's not the only one), excitedly replies "you are the Doctor!" In the tone of someone talking to a kid who has been held back a couple of years and thinks that two and two equaling four is the coolest thing ever, Five makes it clear that they've established that and demands to know whether there's something wrong with Ten.

In response, Ten merely happily makes fun of Five's "frowny face", before pointing out that it's a bit saggier than he remembers and the hair's a bit greyer, which Five appreciates about as much as you'd expect (especially as this comes with added prodding and rubbing — no, not like that). Ten explains the fact that Peter Davison's clearly much older than he was in 1983, and only just fitting into his old costume, with some technobabble about the time differential shorting out. After this helpful bit of exposition, Ten continues his appreciation of Five's "crickety-cricket" stuff, but struggles to come up with anything complimentary to say about the stick of celery in his lapel, although it's clearly a brave fashion choice on Five's part.

At this point, Five's had enough, snaps and yells "Shut up!" (note to self: don't criticize the celery). Whipping off his hat to show how serious he is, Five points out that there's something very wrong with "his" TARDIS, he's got to do something very quickly and it'd be a lot easier if he didn't have "some skinny idiot ranting about every single thing that happens to be in front of him". Ten apologizes in a very humbled fashion, but perks up immediately when Five turns around and he gets to see the back of his own head. He's a bit less impressed with Five's emerging bald-spot, though.

Five decides to go on the offensive again and demands to know what's happened to his TARDIS, Ten obviously having changed "the desktop theme" to "Coral" since Five's time, which is worse than the leopard skin. Ten geeks out again when Five puts on his "brainy specs", happily needling him by pointing out that Five doesn't even need to wear them, but thinks they make him look clever.

A level five alert indicating a temporal collision interrupts the fun and games. Five panics, and begins to run around the console. Continuing his quest to not notice the painfully obvious, he babbles about how it's as if there's two TARDISes occupying the same space, but there's only one TARDIS present. In any case, there's two time zones "at war in the heart of the TARDIS", ominously noting that the paradox resulting from it could blow a hole in the space-time continuum. Ten, who has been watching Five dance around the obvious conclusion with a "Dude, seriously" expression on his face, twists the console monitor to face Five, who's a bit deflated to learn that the hole will only be the size of Belgium, which as holes in the space-time continuum go is a bit small, and, in Five's words, undramatic.

Ten offers his sonic screwdriver to Five, who rejects it. Obviously smarting a bit from his earlier dressing down, Ten bitchily points out that Five "went hands free": "Like, hey, I'm the Doctor, I can save the universe with a kettle and some string! And look at me, I'm wearing a vegetable!"

Five again demands to know who Ten is. Ten mysteriously encourages Five to "take a look". Five then comes to the dawning conclusion that Ten is... "a fan!" (which is technically true). This is evidently not the response Ten was expecting. Whilst Five continues to panic about the impending crisis ("Two minutes to Belgium!"), Ten finally decides that Five, who is a lot denser as well as being chronologically younger, obviously needs it spelled out for him, but Five merely interprets this as Ten saying he's Five's biggest fan, pausing his frantic prodding at the console to discuss in detail just how great he is, and that weird little groups like LINDA notice him sometimes.

The Cloister Bell rings. Five begins to panic again, and Ten decides that it's time he actually did something other than prattle. In another helpful bit of exposition, Ten points out that it's all his fault because he forgot to put the shields back up after rebuilding the TARDIS following "Last of the Time Lords", and uses some technobabble to cause a supernova and a black hole forming at the exact same instant, which cancels out the paradox. Five is at first surprised by the unexpected solution, before he realizes that Ten came up with it because he would remember having watched it now as Five, meaning that Ten is his future self. Ten tries to celebrate Five finally catching up with the rest of the world with a high five, but Five just looks at him like he's sprouted a second head.

The TARDISes begin to separate, and Ten tries to work out where Five is in his time stream by making references to Tegan, Nyssa, the Time Lords and the Master, mentioning that the latter just came back. Five sighs, exasperated at the fact that the Master is still around to bother him in his future, and asks if he still has that "rubbish beard". Ten assures him that the Master is beardless this time... unless you count the wife, of course. Five begins to fade away, but Ten brings him back by flipping a switch. Ten gives Five his hat back and makes a lovely speech telling Five how much he loved being that incarnation, since it gave him the opportunity to just loosen up, play cricket and have a laugh after the pompousness of his previous selves. He then points out all the ways that Five continues to inspire him, with his trainers and his squeaky voice and his glasses (and essentially, this is all David Tennant talking, while the fanboys and girls of the world start tearing up). Touched, Five raises his hat in salute: "To days to come." "All my love to long ago," Ten replies, and Five disappears.

Ten begins to potter around the console again. Five's voice archly reminds him to put the shields up; but it is too late, because at that moment, the Titanic crashes into the wall, and we're into "Voyage of the Damned".

Behind the scenes, this minisode would have unexpected ramifications. Davison's real-life daughter, Georgia Moffett, would guest-star with Tennant in the next season's episode "The Doctor's Daughter" (in which Georgia plays a cloned daughter of the Doctor, though the episode's double-entendre title was not unintentional). Either during or after filming, Tennant and Moffett began dating and they later married and, to date, have had four children (technically five, as Tennant adopted Moffett's daughter from her previous relationship), thereby making Davison Tennant's father-in-law, a fact that Davison would later play up in the 50th anniversary tribute/spoof The Five(ish) Doctors Reboot.