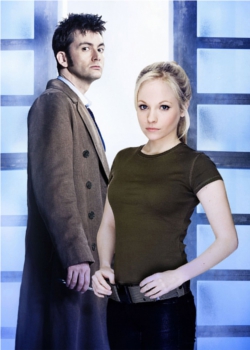 Attractiveness. It runs in the family.
Donna: Not what you'd call a natural parent, are you?
The Doctor: They stole a tissue sample at gunpoint and processed it. It's not what I'd call natural parenting.
Advertisement:

The one where future husband and wife get to act together as father and daughter...

Let's just say the one where the Doctor bore a child without gettin' jiggy with it.

In which an important and fascinating new character shows up... but not for long.

Martha was saying goodbye, but the Doctor's hand-in-a-jar violently teleports the TARDIS to an alien planet. (In case you're wondering why he keeps that thing next to the control panel, there's a very good reason for it.) Since the "Doctor Detector" only does that sort of stuff in rare situations, it could only mean two things: either the Doctor himself is on that planet, or something exactly like him.

The planet, called Messaline, is inhabited by two different species: Humans and Hath (walking fish). Only five seconds after stepping off the TARDIS, the Doctor and his companions are held at gunpoint by human soldiers, and the Doctor is forced to put his hand into a strange machine. There is some whinging, and then out of the machine steps a very pretty blonde girl — fully dressed and made-up, able to wield a gun, played by Peter Davison's daughter and snarky to boot.

The machine is for cloning, made for creating soldiers for either group of the planet's inhabitants. The hand-in-a-jar made the TARDIS arrive a bit too soon, which caused the Doctor's DNA clone to be on the planet in the first place. The Doctor realises that this is, for all intents and purposes, his daughter now. He's extremely freaked out by this and tries his best to see her as a thing: a clone, a temporary echo, a "generated anomaly". Donna calls him out on his Jerkass behaviour and shortens "generated anomaly" to "Jenny", which the girl likes as a name. She merrily calls the Doctor "Dad". Jenny shows herself to be a remarkable soldier, implanted with all the instincts and history knowledge she needs for combat, much to the Technical Pacifist Doctor's aggravation.

They all travel together to the humans' base. Along the way, Martha is kidnapped (and soon befriended) by the Hath, but Jenny causes an explosion, meaning the Doctor and Donna can't get her back. Here the storyline splits.

The Doctor and Donna are locked up in jail because the Doctor opposes the commanding General's plan to wipe out the Hath, and Jenny is tossed in for defending them. She tries to get to know the Doctor a little, and quickly points out that if he was a soldier, and if he has killed, and if he won a war... what's the difference between them? She has two hearts like he does, and she just wants to live for what she feels is right. Before that happens, they find out that the humans are fighting the Hath for control of the Source. Jenny kisses her way out of jail, and frees the Doctor and Donna. They remain one step ahead of the humans, trying to get to the Source.

Meanwhile, Martha finds out the same from the Hath, and decides that the quickest way to get to the Source is over the top of the planet. Escorted by her new Hath friend, she travels the dangerous planet, avoiding swamps and fires. Her friend saves her from some form of alien quicksand and dies in the process, but Martha makes it to the Source... just as the Doctor and company arrive at the other door.

Of course, they're followed by various humans and Hath, both shooting at one another as well as our heroes.

The Doctor finally explains to Donna why he's being so cold to Jenny: he used to be a father (and grandfather), before the Time War, when he murdered every member of his species. Seeing Jenny just reminds him of all this.

Donna, who has been noticing weird plaques above all the doors, uses her Super Temp powers to put 2 and 2 together and figures out that the colony is not more than a week old. The mutual histories were merely warped by continued use of the cloning machine. The Source, originally thought to be a mythical creator, is actually a terraforming device. The Doctor explains this to the mostly-bewildered clones before throwing the Source to the ground, destroying it. This subsequently releases the terraforming gases onto the planet's surface.

Perhaps justifiably, the human General tries to shoot the Doctor. Jenny steps in front of him, Taking the Bullet, and dies in his arms. The Doctor has the chance to shoot the General in revenge but doesn't. Instead, he demands that "this world of human and Hath" be founded on "the man who never would" harm another soul. After a few minutes of waiting for regeneration, a heartbroken Doctor, Martha and Donna leave. Martha says "There is no regeneration. She's like you, but maybe not enough," to which he replies "She was too much like me."

Travelling back to Earth, Martha expresses her happiness at not being involved in any more death and destruction and warns Donna about the dangers of companionship. Donna laughs it off, saying she wants to travel with the Doctor forever, and she and the Doctor head back out into the wide galaxy, while Martha goes off to help out Torchwood Three for a while. Just before the credits roll, however, it turns out the Doctor didn't wait quite long enough. Jenny wakes up (with the same face), revived by either regeneration or the terraforming gas, and, much like her father, rambles on for a few minutes as she takes the last spaceship on Messaline to head out and travel the stars.