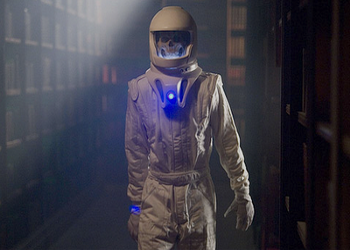 The one with the Elephant Woman. Also the one where we see an end long before a beginning.

Donna, our favourite stroppy Londoner, has been having some funny turns recently. As we all know, she was a bit confused and spent a few years in a mental institution. There, she met a nice man called Lee, and now she's happily married with two kids. But lately, she's been having "lost time", and Dr. Moon says everything is fine, and...

But what about the Library of the future, and the people-eating shadows, and River Song and everything? And then we see a familiar person in Donna's world: Miss Evangelista, one of the Red Shirts killed in the last episode. And she tells Donna that none of this is real.

When Donna rips off Miss Evangelista's veil, it reveals that her face has become glitched. The little girl, watching all this on her TV, screams. So do you, because Steven Moffat.

Donna and everyone else aren't really in present-day London. They're in a Lotus-Eater Machine, and the computer is getting a little overloaded. Doing what? Saving all the people, of course... that's where they all went. They got saved... to disk. When the Vashta Nerada arrived, the Library's computer tried to teleport 4022 people out all at once, and the system overloaded. Even the neural echoes of people, briefly captured by their suits' comm systems, get included. Which is how Miss Evangelista now lives on.

The Vashta Nerada usually live in forests. They hatch in trees. Trees... that were made into a planet full of books.

The little girl really was a little girl: related to the founder of the Library, she was merged with the Library's computer as a gift to her when doctors couldn't save her life. Her therapist, Dr. Moon, is quite literally the planet's moon, which contains backup systems that stabilise the computer from above.

While the Doctor, back in the real world, works all this out, a couple more people get eaten by the shadows. The Doctor teaches the Vashta Nerada how to use the suits' comm systems to communicate, but it doesn't exactly help. He does, however, convince the creatures to give him one day, and after that, they can have the planet all to themselves. And River manages to persuade him to trust her by whispering something in his ear...

The Doctor realises that he'll need to pull a Heroic Sacrifice to rescue Donna and the rest of the saved people. River punches him square in the face, handcuffs him to a wall and decides to sacrifice herself instead. Because she knows that if the Doctor sacrificed himself this way he wouldn't be able to regenerate, as the machine's continuous shock would kill him permanently. And now she knows that this is not only his first time meeting her, it's also her last time seeing him... and that from his perspective, their entire relationship will have been based on the moment the Doctor saw her die. The Doctor is powerless to stop her, and asks her why she was able to whisper that one word into his ear — his name. His real name. Her only reply is a final "spoilers!", and with that, she dies.

All the not-dead people are transported back to the library. Donna desperately searches for her Matrix-world husband, whom she truly loves. But just when he sees her, he's teleported away to his own home, and she decides he must have been imaginary. The Doctor leaves River's diary and her sonic behind in the Library —

— she knew his name. He gave her a screwdriver. Why did he give her a screwdriver? Because the screwdriver has a neural relay with her mind's echo stored inside it. The Doctor races back to the little girl/computer and plugs in what's left of River. Her echo, and those of her companions who died today, can live on forever in the Matrix system, being able to live out untold billions of books. In a bittersweet way, Everybody Lives.

Alternative Title(s): Doctor Who NSS 4 E 9 Forest Of The Dead