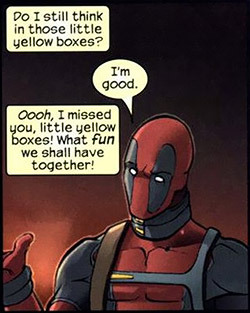 Goddammit, Deadpool, we just fixed the fourth wall!
"Static panels, speech bubbles, 72 DPI... I'm inside a webcomic! They will probably mock me like always, better get out of here!"
—Sonic the Hedgehog, Nerf NOW!!
Advertisement:

(No, this isn't about when a character realizes they've met an oracle, or pays the usual amount of attention.)

Audiences are good at figuring out which elements of a work are on which side of the Fourth Wall. No explanation is necessary for why our hero can hear his Inner Monologue but not his perspective's Background Music, or why the space ship is menaced by the Negative Space Wedgie, but not by the opening credits drifting by outside the ship: it's something we accept as part of our Willing Suspension of Disbelief.

It's also a wonderful thing to play with, and that is what Medium Awareness does; the characters acknowledge and interact with elements and conventions of the medium that shouldn't technically "exist" in-universe. Suddenly a character can tell how another character is feeling just from the Background Music and reply to the disembodied narration, they can read the subtitles at the bottom of your screen, and they can tell when it's almost time for a commercial break.

Generally, this awareness is brief; it's used for a joke or two and then never mentioned again. Used this way, it's Lampshade Hanging as applied to Paratext.

May involve Breaking the Fourth Wall. Compare with other metafictional devices, particularly Painting the Medium, which uses Paratext and artifacts to tell the story, and Reading Ahead in the Script which is exactly what it sounds like. Left the Background Music On is a specific inversion. Fourth-Wall Observer is what happens when a particular character has this on full-time and the rest do not. See also Genre Savvy (which doesn't involve the Fourth Wall) and No Fourth Wall.

Just as Skippy is starting to recover, the in-flight movie is none of other than a parody of Old Yeller, Slappy has this reaction when "Old Yellow" gets shot during the in-flight movie, and she flatly says "Uh-oh" right before Skippy starts bawling again.

Example of:
Here We Go Again!

Just as Skippy is starting to recover, the in-flight movie is none of other than a parody of Old Yeller, Slappy has this reaction when "Old Yellow" gets shot during the in-flight movie, and she flatly says "Uh-oh" right before Skippy starts bawling again.