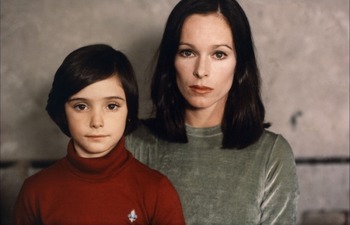 Cria Cuervos is a 1976 film from Spain directed by Carlos Saura.

Ana is an eight-year-old girl. In the opening scene, her father dies of a heart attack in the middle of sex—although Ana doesn't know that's the reason why. This leaves Ana and her sisters Irene and Mayte orphaned, as their mother, Maria (Geraldine Chaplin, daughter of Charlie, mother of Oona) died not that long ago, of cancer.

Her mother's sister Paulina arrives to take charge of the children. What neither Paulina nor anyone else knows is that Ana thinks she murdered her father. Ana spooned baking soda into her father's milk, believing it to be poison; when her father promptly died Ana assumed she was responsible. Ana, who takes a quick dislike to Paulina, decides to kill again.