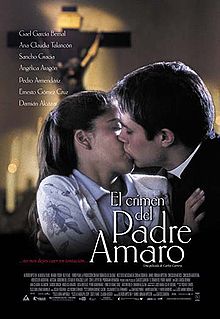 Thou shalt not fornicate.
Advertisement:

El Crimen del Padre Amaro (The Crime of Father Amaro) is a Mexican film released in 2002, starring Gael García Bernal, and Ana Claudia Talarcon, loosely based on based on the 1875 novel O Crime do Padre Amaro by Portuguese writer José Maria de Eça de Queiroz. It was directed by Carlos Carrera.

Amaro is a young, recently ordained Catholic Priest who, by orders of the bishop, is sent to the small town of Los Reyes, Aldama to perform his duties as a priest under the supervision of the town's priest, Father Benito. There, Amaro witnesses and becomes entangled in the affairs between the Catholic Church, the drug lords and the guerrillas in the mountains. He also becomes infatuated with Amelia, a beautiful teenager and a devout Catholic who is also the daughter of Father Benito's mistress. Ignoring the priesthood's Vow of Celibacy, he starts an affair with her and impregnates her, fearing for the future of his career in the church and his reputation in the town he decides to take Amelia to a backstreet abortion clinic... which ends in tragedy.

Famously, this film suffered an attempt of boycott by the Mexican Catholic Church before it was even released, which actually increased the interest of the people to see it, ending up in transforming it into a massive blockbuster and earning it an Academy Award nomination.