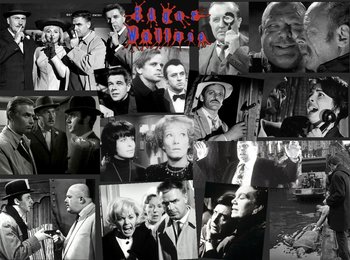 The thrillers of the British novelist Edgar Wallace became very popular in Germany between the world wars, partly thanks to a successful ad campaign based on the slogan "Es ist unmöglich, von Edgar Wallace nicht gefesselt zu werden!" ("It is impossible not to be captivated by Edgar Wallace!"). In 1927 the first of them was adapted into a (silent) German film, and four more followed until 1934, but then the franchise dried up. Until the late 1950s, German film producers would not touch the genre again.

In 1959 the Danish firm Rialto Film produced Der Frosch mit der Maske, the first post-World War II Edgar Wallace film, for the West German distributor Constantin Film. It became a surprise hit and led to Rialto setting up a West German affiliate firm and buying the exclusive rights for all Wallace novels to produce more. All in all, Rialto produced 32 Edgar Wallace movies, and other firms also jumped on the bandwagon, producing six more Wallace-themed crime and detective films. Most were produced by Horst Wendlandt, the man also behind another very successful German film franchise of the 1960s, the Karl May Westerns. The Edgar Wallace franchise was looked on as lowbrow by most movie critics, but was very popular with the German public and the films continue to be shown on German television to this day.

The films were produced on a comparatively small budget and thus were filmed not in England, where they are set, but in West Germany, usually in Hamburg and its environs, the footage then intercut with stock establishing shots of places like Big Ben or Piccadilly Circus. The tone was often a bit tongue in cheek, and even some of the leading stars of West Germany's stages and screens liked to perform in an Edgar Wallace or two. From quite early, there was a tendency towards tongue-in-cheek comedy. The franchise was later parodied in Der Wixxer.

The series had a number of stock characters and actors associated with it:

And there was a big assortment of other actors filling the parts of the heavies, mysterious characters, old ladies who knew more than they let on and what have you. Also as the series progressed, the films sometimes subverted this typecasting, and thus on at least one occasion each, comic relief Eddi Arent and upright Horst Drache turned out to be the Big Bad.

The success of the Rialto films inspired their biggest competitor, CCC Film, to jump on the train and buy the rights to the spy novels of Edgar Wallace's son, Bryan Edgar Wallace. Their plots were thoroughly rewritten (to the point they had little to do with the novels), but the resulting movies (which were utterly dependent from the Rialto films stylistically) could be advertised as "B. Edgar Wallace Movies" — in the apparent hope that audiences wouldn't know the difference.

These films show examples of: