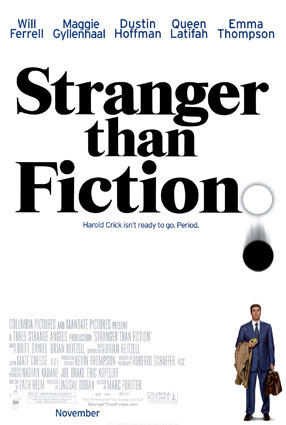 Mundane IRS auditor Harold Crick (played by Ferrell) is minding his own business, living his daily routine, when one day, he begins to hear a voice... the voice of an author. Her voice follows him everywhere, narrating his daily activities, much to his annoyance. After all, there's not much to narrate. Beyond going to work, brushing his teeth, and eating meals alone, nothing at all happens worth narrating. Until he hears one line that changes everything. "Little did he know that this simple, seemingly innocuous act would result in his imminent death."

That one narration is enough to thrust Harold into action, eager to do anything it takes to avoid his death. Though told he's schizophrenic by the psychologist he sees, Harold refuses to believe such a diagnosis. Instead, he seeks out the foremost professor in literature, Dr. Jules Hilbert (played by Hoffman). Hilbert quizzes him extensively on the narrator, then sets Harold to figuring out whether he's in a comedy or tragedy. After all, in a comedy he'll get hitched, but in a tragedy he'll die.

At the same time, author Karen Eiffel (played by Thompson) wrestles with severe writer's block. She's been working on her latest novel for quite some time, but is at a complete loss at how to kill off her protagonist... one Mr. Harold Crick.

For the idiomatic definition of "stranger than fiction", see Reality Is Unrealistic.