Fanfic / The Apprentice, the Student, and the Charlatan 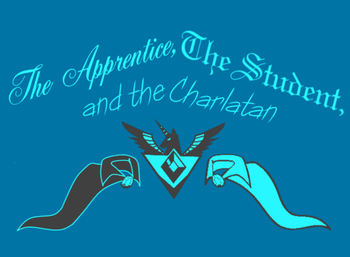 Image created by Truesailorcomet
“The stallion likes the mare, the mare likes the stallion. The mare is open about it, the stallion keeps it to himself, leading to all this unnecessary drama and tension. Really, this story just writes itself, doesn’t it?”
—Nova Shine, summing up the first half of the story.
Advertisement:

Freshly freed from her 1000-year imprisonment on the moon, Princess Luna takes a student of her own to train in magic for the first time since before her banishment. The unicorn she chooses, Nova Shine, is a rather reserved unicorn with a cutie mark of stars and a moon, a sign of his potential to become a powerful spellcaster. However, his ability is hampered by his own self-doubt and his issues with anyone who tries and succeeds at getting through to him to get him to open up, such as Twilight Sparkle, a mare he had met earlier on the day he was selected as Luna's apprentice.

Together, the trio discover and investigate the ruin in the Everfree Forest and discover the subject of their nightmares: a shadow as old as Equestria itself, who has been using Trixie as a vessel and would like nothing better than to plunge a knife into all of their backs. Nova and Twilight escape and begin to work to defeat this shadow, rescue Trixie, maybe resolve their burgeoning relationship, and hopefully escape with their lives.

The Apprentice, the Student, and the Charlatan is an epic-length My Little Pony: Friendship Is Magic fanfiction written by FIMFiction user

) Rytex. The fic was originally uploaded on 16 November 2012, and was finished a full year later on 16 November 2013, but he began rewriting chapters in early 2015 due to the contrasting quality between the beginning and end of the story, as well as to utilize characters that were fully fleshed out as opposed to not quite developed yet at the initial time of writing.

In February 2016, the first episode of an audio drama produced by TrueSailorComet

was released on YouTube. Partly due to the wider audience of YouTube (and partly due to being featured on Equestria Daily), the audio drama quickly gained relative popularity, outshining the original fic by a good margin.

The fanfic can be read here,

. The fanfic had a sequel that was ultimately cancelled. A second sequel, titled The Archmage's Last Bow, began in late 2019 following the show's finale, and remains in progress.

This Fanfic Contains Examples Of:

Nova: A sequel, a rewrite, and now a TV Tropes page? We really are going up in the world, aren't we?
Twilight: TV Tropes? I've never heard of it.
Nova: Well, if you value your free time, stay away.