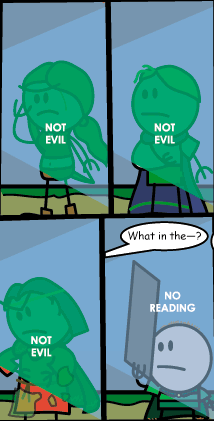 "Halflings of my village carry lead sheets to prove our manhood."
Advertisement:

A way to counter True Sight is to be covered in material that cannot be penetrated by such vision. Other ways of achieving this include being in an area full of something that interferes with True Sight, or having an artifact that has the same effect. See also Anti-Magic.

Commonly it's lead for X-Ray Vision, much like in Real Life, though it can be Applied Phlebotinum in other cases.