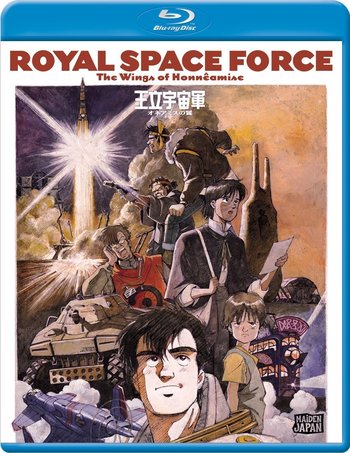 Royal Space Force: The Wings of Honnêamise (王立宇宙軍 オネアミスの翼, Ōritsu Uchūgun: Oneamisu no Tsubasa) is a 1987 film that was Studio Gainax's first major anime production after it made its name with the famous Daicon IV short. The film is directed and written by Hiroyuki Yamaga.

In an Alternate Universe, Shirotsugh "Shiro" Lhadatt (voiced by Leo Morimoto) is a slacker from a middle-class family in the kingdom of Honneamano, who dreamed of flying airplanes since he was young — but his grades weren't good enough, so he ended up as part of their fledgling space program, the eponymous Royal Space Force. The program is essentially a joke — a collection of old dreamers assembling test rockets and a few young slackers and never-do-wells rejected by the real military and twiddling their thumbs when they're not being guinea pigs. Then, on one night on the town, Shiro sees a young woman passing out religious pamphlets in the middle of the Red Light District; for not entirely pure reasons, he takes one, and meets the woman, Riquinni Nonderaiko (Mitsuki Yayoi), later. During their meeting, he's amazed at her enthusiasm when she learns that Shiro's an astronaut in training. Riquinni seems enraptured at the thought of man literally and metaphorically ascending beyond the sinful world, and Shiro's agreement becomes more genuine by the second.

Later, the leader of the space program, Dr. Gnomm (Chikao Ohtsuka), announces that they're going to make an all-or-nothing gamble: to actually send a man into space. All they need is a volunteer.

But, if Shiro insists, and there's nobody else, they'll make do.

Royal Space Force follows the growth of the alternate space program from the design stages through the final countdown to launch, alongside the development of Shiro's courtship of Riquinni — and how her religious faith affects him. Meanwhile, the Space Force is being used as a political pawn, and it's not sure whether Shiro will be able to launch...