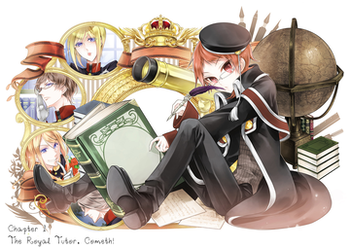 The Royal Tutor (in Japanese, Oshitsu Kyoshi Heine) is a manga by Higasa Akai, which was published in Monthly G Fantasy from 2013 to 2021. It was adapted into an anime by studio Bridge in 2017. The story revolves about Heine, a very youthful-looking teacher who was ordered by the king of Grannzreich to tutor his four young princes and turn them into men suitable to inherit the throne.
Advertisement:

The Royal Tutor has examples of: