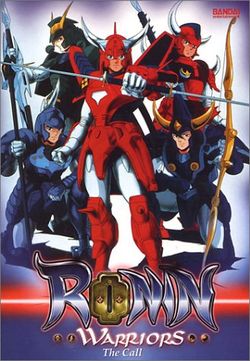 Why are they "ronin"? That's a good question.
Advertisement:

Yoroiden Samurai Troopers is a 39-episode Shōnen anime produced by Sunrise in the late 1980s; its story centres on a group of young men in possession of transforming mystical armors. Sunrise designed the show to capitalize on the success of another hit show about young men with mystical armors, although Samurai Troopers was made with Sengoku flavor. The series came to the United States in 1995 as Ronin Warriors, where it meshed well during the post-Power Rangers wave. The show's American dub remains one of the least Macekred Anime-to-American TV adaptations of its time in terms of cuts (excluding the name changes).

In the first episode, Master Talpa, the supreme lord of the Underworld—who spends most of the show's first arc as a floating demonic mask—enters the mortal world and invades Tokyo with a horde of demonic henchmen. A handful of people escape the flood of Talpa's Dynasty henchmen; Yuli, a young boy whose parents end up captured during Talpa's invasion, and Mia Koji, a young student-teacher and researcher of ancient Japanese legends and antiquities, are among the escapees.

Also witness to this event: five athletic young heroes in colorful armor, one of whom—Ryo—wandered into the city alongside an enormous white tiger minutes before Talpa's arrival. When Mia and Yuli are threatened by Talpa's foot soldiers, Ryo and the other heroes step in to rescue them. Talpa sees the five warriors as a threat to his invasion and casts them to the four winds with his supernatural powers. This leads to Mia and Yuli travelling across Japan to find and reunite the Ronin Warriors so they can prevent The End of the World as We Know It. But the young warriors and their friends have more than just Talpa and his low-level goons to worry about: The evil mastermind has four powerful warlords in his employ, each of whom have their own mystical armors that allow them to unleash unspeakable horrors upon the world. (The heroes have Yuli on their side, so things even out.)

Once the warriors reunite, they venture into Talpa's demonic stronghold and discover the origins of their armors. Long before Talpa came to conquer Tokyo in modern times, a mystic known as The Ancient One defeated Talpa in battle. The mystic sent Talpa's soul to the Underworld, but the warlord's demonic armor remained in the mortal world. As a precaution against Talpa's possible return, The Ancient One melted down the armor, then remade it into nine separate armors. Five of these armors found their way to the Ronin Warriors; the other four ended up with Talpa's Warlords. The heroes press on into battle even after learning the truth, and Ryo eventually defeats Talpa after the power of all five Ronin Warriors combine to give Ryo a new suit of armor.

Several new foes show up after Talpa's defeat to challenge Ryo while he learns to control the the Inferno Armor's immeasurable power. But these villains are a distraction from the true threat: Talpa, who still lives on in the Underworld, and the corrupted Lady Kayura, the last member of the line of Ancients and a force more powerful than even the Inferno Armor. The Warriors decide to strike at Talpa in the Underworld instead of waiting for another invasion, hoping to stop the warlord's schemes once and for all.

Sunrise followed up the series with three OVAs: Gaiden, Kikoutei Densetsu ("The Legend of the Solar Armor"), and Message. Each OVA features their own distinct storyline and villains.

Thanks to its cheesy-yet-enjoyable dub, lack of content cuts, and wide exposure via syndication (and later Toonami), Ronin Warriors helped pave the way for the mid-to-late 1990s anime boom. Bandai gave in to fan demand in the early 2000s by releasing the entire show on special double-sided DVDs: one side contained episodes of Ronin Warriors, and the other contained subtitled and uncut episodes of Samurai Troopers. Bandai later released the OVAs—with their own dub to boot—then eventually released both the series and the OVAs together in a collector's set. The individual DVD releases likewise had a special "flip" cover where both sides shared the same layouts save for the back-cover text and logos, which stayed in line with each version of the show right down to episode titles and character names. Discotek Media eventually rescued the Samurai Troopers license and released the series and OVAs on DVD; legal issues surrounding the Ronin Warriors dub, however, prevented Discotek from re-releasing that version until the Blu-ray release.