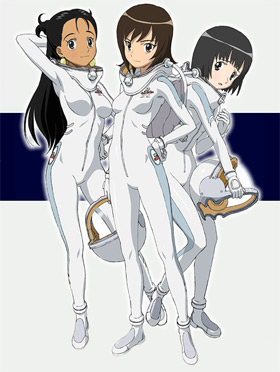 It's summer vacation. High schooler Yukari Morita is visiting the Solomon Islands to try and find out what happened to her father, who disappeared there seventeen years ago while her parents were on their honeymoon. Meanwhile, the Solomon Space Association — a Japanese corporation trying to corner a market in satellite repair by developing low-cost manned spacecraft — suffers a serious setback when its newest rocket design explodes during testing... for the sixth time. Desperate to ensure a successful flight before the company's financial assistance from the government is cut off, they decide to dust off an older but less powerful rocket design. The only problem is, using it would require their astronaut to lose a rather unhealthy amount of weight. And height. Already at his limit due to the launch failures and the sadistic tendencies of the company's doctor, the spooked astronaut steals a vehicle and flees the base, almost running down the now stranded Yukari in the process.

A wild chase ensues, and before long, the SSA has their man back in custody — but it's clear to them he's just not going to work out. The chase has however brought them into contact with Yukari, who happens to weigh in at a very petite thirty-eight kilograms. Recognising an opportunity, the SSA's unscrupulous Director offers to use the company's supposed connections with the local police to help Yukari find her father... if she agrees to do a job for them. It's just a simple job... one so easy "even a monkey could do it."

Naturally, she's a little freaked out when she finds out that they intend for her to fly a spaceship. But she still wants closure on the issue of her dad, and she's not going to get that without the SSA's help. As such, she reluctantly begins astronaut training. Joined in her endeavours by the energetic Solomon Islands native Matsuri (who turns out to be her half-sister) and later by the intellectually gifted but physically weak Akane Miura, Yukari is soon going Where No High School Girl has Gone Before... into space!

Based on a series of light novels by Housuke Nojiri and produced with technical assistance from JAXA (the Japanese counterpart to NASA), Rocket Girls is a rather hard science fiction series. It aired on Japanese TV in 2007 and was released for the American market as a sub-only DVD in 2008.

For those interested in the original books, the first

of the Rocket Girls light novels are now available in English.