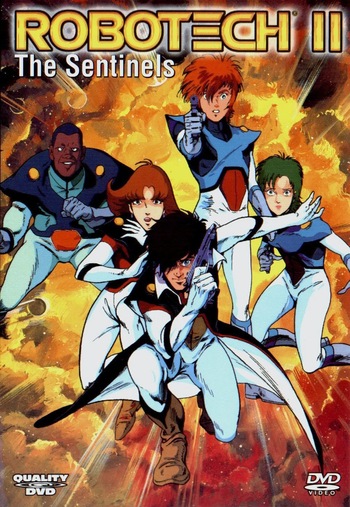 Robotech II: The Sentinels was an attempt to produce original content and a sequel series after the end of Robotech. Harmony Gold USA worked with Tatsunoko Productions in producing the show, but only three episodes were worked on before the rest was cancelled because of the crash of the Dollar to Yen exchange rate in the 1980s, which forced Matchbox to back out as a sponsor. Since HG was not able to finance the show's production, it was decided to make it a feature film instead, which was released initially on September 1988, followed by Streamline Pictures later released it in 1992. A remastered version was released with the Robotech: The Complete Set collection in 2011 and in 2013 from Lionsgate, showing the first three animated episodes as originally intended.

The Sentinels takes place in 2022, with Rick and Lisa about to be married as the Robotech Expeditionary Force (REF), known publicly as the Pioneer Expedition, prepares to leave Earth behind to search for the Robotech Masters' homeworld Tirol, hoping to stop a future war in its tracks. Instead, the SDF-3 would be left stranded and forced to work with both the Tirolians left behind by the Masters, and a ragtag group of alien resistance fighters, the Sentinels, to defeat the Invid Regent. If they can't succeed in time, the United Earth Government left behind would be left helpless before both the Robotech Masters and the Invid Regess, who have set their sights for humanity's homeworld.

Due to the show being canned, the bulk of the story was told through various adaptations, based on the scripts and technical notes provided by Harmony Gold. The one adaptation that reached completion was the novelization written by Jack McKinneynote A Pen Name for James Luceno and Brian Daley, published in 1988 after the adaptations of the original series. A comic book adaptation of the story published by Eternity Comics (an imprint of Malibu Comics), and later by indie publisher Academy Comics, ran from 1988 through 1996, but was cancelled short of completion.

The proposed show provides examples of: