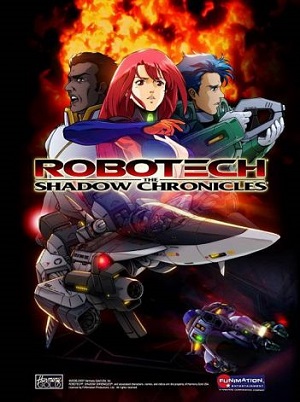 Robotech: The Shadow Chronicles is the 2006 animated sequel to the 1985 Robotech television series. It is an original production that has nothing to do with any of the Macross sequels note although it could, if one wanted, be adapted back into Genesis Climber MOSPEADA... but instead was made exclusively for the Robotech fandom.

The Shadow Chronicles takes place during and after the events of the final two episodes of the series. The story follows the arrival of the Earth Expeditionary Fleet to retake their home planet from the Invid, the Big Bad of the third cycle. They are armed with special technology provided by a sinister race called the Haydonites that they hope will provide them with the edge they need in battle. Characters from all three cycles of Robotech are united with newly created ones to deal with this new threat.

Robotech: The Shadow Chronicles was intended to be the start of a new movie franchise and series. The live-action Robotech movie (still deep in Development Hell) may or may not impact the development of future products along this story. The movie is controversial with some fans in that it ignored the previously canonical spin-off novels by James Luceno and Brian Daley (under the name Jack McKinney).

A prequel Comic Book miniseries Prelude to the Shadow Chronicles published by Wildstorm established the events between the end of Robotech and prior to the events of the movie. It went out of print when Wildstorm dissolved.

A sequel entitled Robotech: Shadow Rising was put aside in favor of Robotech: Love Live Alive, a retooled Genesis Climber MOSPEADA OAV that was released alongside a reissue of The Shadow Chronicles in July 2013.note As of 2020, the official trademark