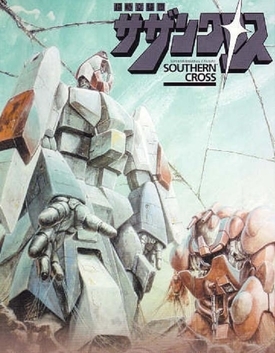 A 1984 anime produced by Tatsunoko Production, Super Dimension Cavalry Southern Cross is perhaps best recognized these days as the second part of the Robotech trilogy.

In the year 2120, humans have colonized other planets after Earth has been left ruined after too many wars. On one such colony planet, Glorie, the Southern Cross army has been established to keep the peace with its Transforming Mecha. Their vigilance is put to use when the planet's former inhabitants, the Zor, come to reclaim their former world by force. It falls to the 15th Alpha Tactics Armored Corps, led by brash newcomer Jeanne Francaix, to lead the charge against the invaders.