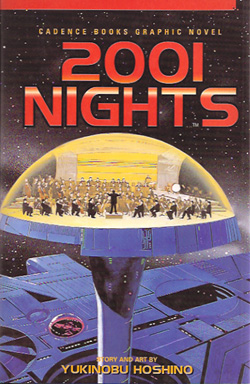 Is the universe filled with lives? Is this empty space we seek to conquer truly a sea of fertility?
Just beyond that light! The final rendevous... Man, the Universe— A higher order!
Advertisement:

2001 Nights: A Space Fantasy by Yukinobu Hoshino is a love-letter to the classic hard sci-fi stories of yesteryear, especially the works of Arthur C. Clarke. It utilizes the themes and style of Arabian Nights to tell a fantastic history of manned space flight from the dawn of the 21st Century to the twilight of humanity. Tear jerkers abound.

The manga was published between 1984 and 1986. There have been two anime OVA adaptations of selected chapters: the one-shot Space Fantasia 2001 Nights in 1987, and TO, a two-episode CGI production from 2009.