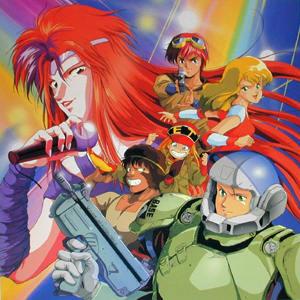 Do you remember that ol' lullaby?
Advertisement:

Genesis Climber MOSPEADA is an anime Science Fiction series created by Shinji Aramaki and Hideki Kakinuma. The 25-episode television series ran from late 1983 to early 1984 in Japan. MOSPEADA stands for Military Operation Soldier Protection Emergency Aviation Dive Armor, one of the transformable motorcycle-armors the series features. The other primary mecha featured in the show is the three-form transformable fighter called the Armo-Fighter AFC-01 Legioss, which is somewhat similar in design to the VF-1 Valkyrie variable fighter from Super Dimension Fortress Macross and is the element that really inspired the show's inclusion into Robotech.

In the 21st century, pollution becomes such a problem that scientists develop the use of hydrogen fuel called "HBT" as an alternative to fossil fuels. Due to overpopulation on Earth, humans have colonized Mars and the moons of Jupiter. In 2050, a mysterious alien race called the Inbit ("Invid" for Robotech watchers) invade the Earth; unable to fight back, humans are driven into a few small pockets of refugees, some of which manage to escape the now-desolate Earth to seek shelter on the moon. 30 years later, the Mars Base sends troops to fight the Inbit, only to fail miserably. The Inbit seem uninterested in other planets and do not show any hostility unless attacked. However, they can sense the use of HBT, forcing humans to limit the use of fuel near the Inbit. Now the humans of the Mars Base fight to reclaim their home planet and unravel the secret behind the Inbit invasion before it is too late for both races.

36 years after the original show ended, a new project named "Genesis Climber Mospeada Genesis Breaker" was announced in August 2020, with Shinji Aramaki and Hideki Kakinuma returning as the Mechanical Designers.