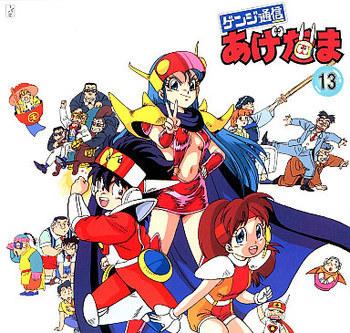 Planet Hero is the origin of the superheroes we know. Not much is known about them, but their summer vacation is the equivalent of one full Earth year, which implies that their orbital period is at least six years, making for an interesting solar system. Retirees sometimes migrate back to Earth to live secluded lives and are perceived as gods or ghosts, while residents with “evil hearts” are stripped naked, rendered amnesiac and exiled to distant planets.

One such denizen of the planet is a young boy named Genji Agedama, a fourth grader and superhero-in-training (under the guise of "Agedaman") who happens to be on his summer break. Along with his floating computer companion Waprō and his love interest Heike Ibuki, he fights against Kuki Rei and her family's criminal organization that can turn humans into monsters of various types.

Genji Tsuushin Agedama (ゲンジ通信あげだま) is an obscure (at least outside of Japan) anime from 1991 produced by Studio Gallop that, on top of being an obvious hero anime targeted at primary school kids, is also an Affectionate Parody of anime series that were popular at the time and of course contains many references to other popular media in Japan at the time.

A video game tie-in was made for the PC-Engine during the series' run.