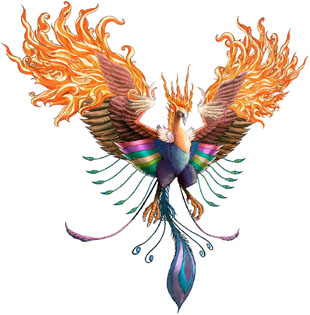 Wings of fire, to lift the heart.
Advertisement:

A massive flying creature made of energy, commonly a predatory bird made of fire, is a common visual metaphor for Limit Breaks, fast transportation and other special abilities. Or just making you look that much more badass. Dragons, moths and other winged creature shapes may also be used, up to Winged Humanoid. The origin of this trope seems to come from The Phoenix. If it's not the Phoenix, it's this.

In symbolism as applied to the wings this, just like other fire-based powers, usually given to Hot-Blooded and/or very powerful beings, whether "demonic" (Balrog), "angelic" (Archangel Gabriel) or otherwise.

Not to Be Confused with the equally badass food that is hot wings. Or, for that matter, with an attractive character who just happens to have wings.