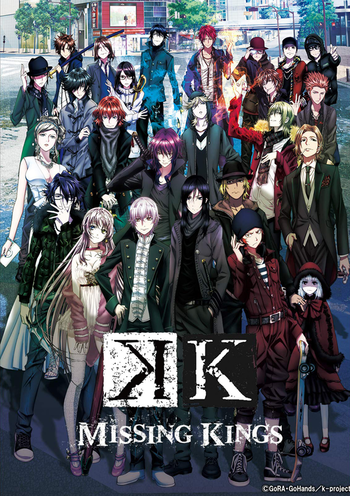 The "Academy Island Incident" in which all four "kings" cross paths... Since then, Silver Clansmen Kuroh Yatogami and Neko have been searching for their master, Shiro. Without finding any clues to Shiro's whereabouts, the two became disheartened. However, one day, they see HOMRA members Rikio Kamamoto and Anna Kushina being chased by someone.
Advertisement:

The follow up movie to K begins a year after the events of the anime. Kuroh and Neko are still looking for their king, the Gold King is missing as well, and Homra has disbanded.

The movies opens with Scepter 4 responding to an attack on the Gold clan's territory by the Green Clan. The Gold King proves to be absent and while his clansmen put up a fight, the tower is overrun. Members of the Red Clan become involved when the Green Clan targets Anna and things proceed to go downhill fast.