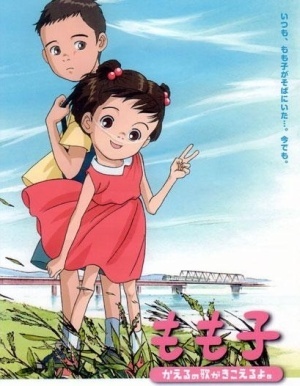 Momoko, Kaeru no Uta ga Kikoeru yo. (もも子, かえるの歌がきこえるよ., also known as "My Sister Momoko") is a 2003 animated film directed by Setsuko Shibuichi, based on a book written by Akari Hoshi and animated by Magic Bus. It's a tale of a boy named Riki and his sister Momoko. The two were born prematurely, and while Riki did not suffer any ill effects, Momoko developed both mental and physical disabilities.

Every morning, Momoko becomes peevish because she can't go to the ordinary school with Riki. Her family soothes her by singing her favorite song "The Song of Frogs."

One day, Momoko shouts encouragement to Riki who's playing dodgeball at an open classroom day and Riki's team wins the game. Ryuji, whose team lost the game, is not impressed and demands that Riki stop bringing his 'idiot sister' to school. Riki totally loses control and hits Ryuji with all his might.

The following year, an experiment in integrated education is implemented and Momoko begins to attend Riki's school. Unfortunately, her physical condition takes a turn for the worse and she's sent to a hospital. Riki and all her classmates want to cheer her up and they set a goal of winning a relay race so that they would be able to tell Momoko the good news. Meanwhile, the fastest sprinter, Ryuichi, insists that he won't be taking part in the race.

Despite having good reviews in Japan, and recommended by people who have seen it, this film is unknown outside of Japan and considered a cult film.