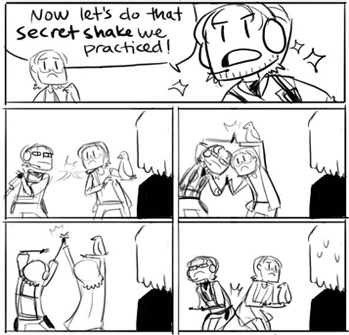 Believe it or not, this actually happens mid-serious scene.note Well maybe not that silly, but still
Advertisement:

A Secret Handshake is a gesture used in greeting between two members of a secret society, a private club, a covert organization as a means to identify themselves to one another, or merely something shared between two best friends. In comedies, this secret handshake will be so long and involved that its utterly unlikely anyone would actually perform it for real. This can be Played for Laughs in two ways:

Note that the Secret Handshake doesn't have to be an actual handshake, but can be any sort of identifying hand gesture.

A subtrope of Handshake Substitute. In some cases, this may appear as a form of Bluff the Imposter, if a character asks someone to give the handshake knowing their group doesn't use one.

Blu and Linda have a secret handshake that is shown 3 times in the film.

Blu and Linda have a secret handshake that is shown 3 times in the film.