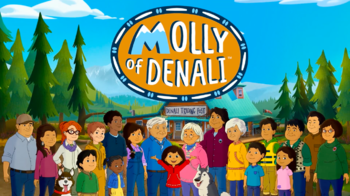 Molly of Denali is a PBS Kids animated series. It has the honor of being the first kids' show with an Alaska Native as the protagonist.note Specifically, Molly is Gwich'in/Koyukon/Dena'ina Athabascan. It is produced by WGBH Boston, with assistance from CBC note Season 1 only. When Season 2 came, they dropped the show and Atomic Cartoons.

Molly Mabray is a feisty and resourceful 10-year-old girl who lives in the fictional village of Qyah, Alaska. She assists her parents Walter and Layla in running the Denali Trading Post, which functions as a general store, bunkhouse, and transport hub. Along the way, she goes on adventures with her best friends, Tooey Ookami and Trini Mumford, and her dog Suki. She also has a vlog, where she shares aspects of her life in Alaska with kids in the lower 48 statesnote , Washington DC, and Hawaii.

The show aims to teach kids about informational text. Molly's life and adventures are enhanced by informational text such as maps, calendars, and satellite tracking; judging the legitimacy of information sources is also addressed. It also teaches traditional Alaska Native values such as sharing what you have and respecting your elders.

On May 30th, 2019, a podcast based on the series was launched. It explains some of the backstory of the show; specifically, on Molly's 10th birthday and how she met her dog, Suki. Listen to it here

In addition, the first ten episodes of series of 3-minute online shorts called The Big Gathering premiered on November 7. The remaining ten episodes will premiere November 21.

Molly of Denali provides examples of:

Theme song to the series.

Theme song to the series.