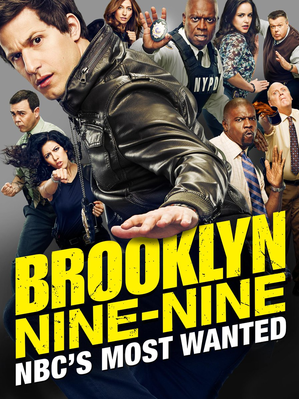 The law. Without the order.note Counter-clockwise from center: Jake Peralta, Rosa Diaz, Charles Boyle, Gina Linetti, Raymond Holt, Amy Santiago, Norm Scully and Michael Hitchcock, and Terry Jeffords.
Det. Jake Peralta: That's how we do it in the Nine-Nine, sir. Catch bad guys and look good doing it.
Captain Raymond Holt: [noticing Peralta shift uncomfortably] What's wrong with you?
Det. Jake Peralta: I didn't take off the Speedo. Big mistake. It is inside me.
Advertisement:

Brooklyn Nine-Nine is a single-camera sitcom that premiered on Fox in 2013, starring Andy Samberg and Andre Braugher. It is set in the 99th Precinct of the New York Police Department, based out of Brooklyn (hence the title).

In particular, it focuses on a unit of detectives that includes Jake Peralta (Samberg), a smart but rebellious and immature cop whose relaxed attitude towards his job comes under challenge when the precinct comes under the command of hardass new captain Raymond Holt (Braugher). Holt, a stoic and no-nonsense man, is less-than-impressed with Peralta's flippant nature, creating immediate tension between the two.

Although the tension and developing working relationship between Peralta and Holt is a central driving element, ultimately the series is more of an ensemble piece, focusing heavily on the other members of Peralta's unit as well.

A month before the premiere of Season Three, a three episode web series called Detective Skills with Hitchcock and Scully aired on the Fox website.

Now has a French-Canadian adaptation, Escouade 99, which premiered on Club Illico on September 17th, 2020.