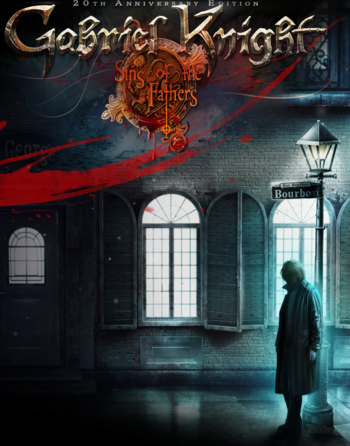 "What can you tell me about... voodoo?"
Advertisement:

A series of PC point-and-click Adventure Game titles, created by Jane Jensen (who had worked on King's Quest VI) and published by Sierra, as well as the name of their primary hero.

The entire series is available for digital purchase from GOG.com.

with Jane Jensen and Robert Holmes' input in 2014. The possibility of a Gabriel Knight 4 getting made has also been confirmed, but whether or not it will actually be realized is currently up in the air.

Novelizations, written by Jane Jensen, were released of the first two games. The third game has a prequel comic entitled Gabriel Knight 3: Prelude that was included with original hard-copies of the game. In the run-up to the release of the 20th anniversary edition a new Gabriel Knight short story, The Temptation, written by Jane Jensen, was released on the Pinkterton Road website. A three-part comic adaptation of the story was released in February 2015. The Temptation is the first canon continuation of the Gabriel Knight series since Blood of the Sacred, Blood of the Damned.

"What can you tell me about...tropes?"

open/close all folders
The series in general
Sins of the Fathers
The Beast Within
Blood of the Sacred, Blood of the Damned
'The Temptation' short story
I really don't wanna be dead. Can we try that again?