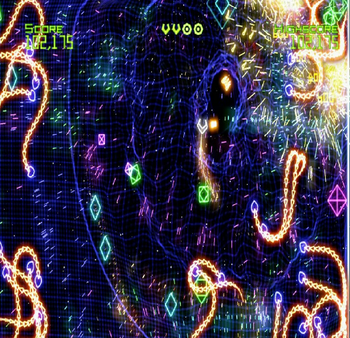 A pretty standard moment for any of the games in the series.
Geometry Wars is a Shoot 'Em Up series by Bizarre Creations, similar to Robotron: 2084, where you control a claw-shaped concave octagon in a quest to destroy many other shapes. Primarily notable for reinvigorating the stale genre and for having insane amounts of stuff on the screen at once (due to the minimal computational power required for each object).
Advertisement:

Originally an Easter Egg in the Project Gotham Racing series for the Xbox. The series' second incarnation, Geometry Wars: Retro Evolved, and its sequel have been released as stand-alone games for the Xbox 360 Arcade, in 2005 and 2008, and were eventually made available on PC via Steam. Before that, it had clashed with the creators of Grid Wars, which started out as a pretty clear clone (but with more features): its development was reportedly stopped at the request of Bizarre Creations, but the issue was eventually sorted out, by making Grid Wars 2 free to download. Lastly, the game has a DS and a Wii version, Geometry Wars: Galaxies.

At Gamescom 2014, Activision announced that Geometry Wars 3: Dimensions was in the works, being developed by Lucid Games, a company made up of former Bizarre Creations staff, including the actual people behind Geometry Wars. It was released under Activision's revived Sierra label on November 25, 2014.

open/close all folders
Tropes that apply to the whole franchise
Tropes exclusive to Galaxies and/or 3: Dimensions Evolved