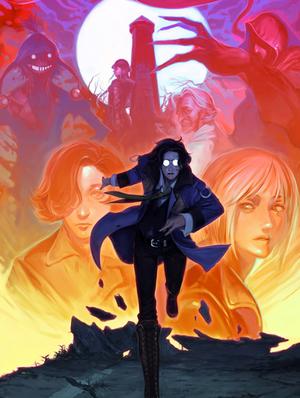 Folklore (known as FolksSoul in Japan) was an early title for the Playstation 3, an action adventure game with JRPG elements.

It features as our stars the young student Ellen, a Mysterious Waif with an amnesiac past, being summoned to the town of Doolin, Ireland by a letter from her dead mother. At the same time, Keats, a skeptical reporter for a third-rung occult magazine receives a phone call from Doolin begging him to save the caller from "The Faeries". These two characters meet up at the same place, only to find the woman who summoned them both has been murdered.

In the course of trying to unravel the mystery of her murder, Ellen and Keats are separately drawn into the Netherworld on the night of Samhain and begin discovering, by meeting with various dead people, that a chain of events starting 17 years ago in Doolin is dramatically affecting the present. Ellen forges forward seeking the truth about her past, while Keats, like any good Intrepid Reporter, hangs around just trying to get a good story. A conflict in the Netherworld gradually comes to light while more people in the present day Doolin are turning up murdered by a mysterious woman known only as The Hag, and everything somehow connects to Ellen's missing past.

The story is told through two perspectives — Ellen and Keats play separate storylines through the same areas until a certain point in the game, allowing the player to start filling in the gaps between the overall storyline. Ellen's powers come from the various Cloaks she wears, which allow her passage into the Netherworld, while Keats' are drawn from having been transformed into Ellen's guardian merely by being within her presence the first time she donned the Cloak. And then, there are the Folks, which are both enemies and weapons to the protagonists — the game's defining feature is the ability to subdue the various Folks and absorb their Ids in order to utilize them as weapons within the Netherworld.

The game's method of delivering its plot is also of note — instead of relying solely on Full Motion Video, it also switches between that, a series of comic-book style story sequences, and traditional dialogue.