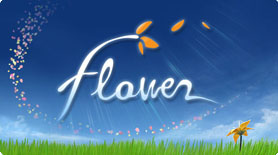 is an independent game by thatgamecompany, and described as their '"video game version of a poem." The game takes place within the dreams of a lonely potted flower upon the windowsill of a rather dreary city apartment.

With the completion of each dream, more flowers appear upon the windowsill, and the apartment grows ever less run-down while the view out of the window grows ever more picturesque. Actual game-play consists, for the most part, of guiding a single, wind-borne petal of the presently dreaming flower, awakening other flowers and adding a petal from each to your own, until you find yourself guiding a great, winding current of blossoms and petals (along with the occasional leaf) through the game's vast and varied landscapes while the ambient music shifts and changes according to locations, movements, and events.

As the game's wordless story progresses, it takes on an increasingly subdued and eventually sinister tone, until the player finds themself witness to a triumphant charge to bring back life to a once beautiful landscape and city.