"Get Back Here!" Boss 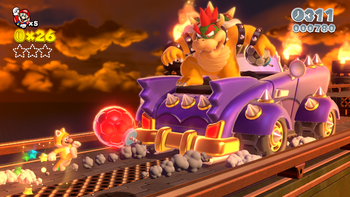 "We give up, Merasmus, you're too scary for us. Now come out so we can kick your ass!"
— The Soldier, Team Fortress 2
Advertisement:

Basically, this is an enemy who makes you chase them around or stake them out for ages in order to defeat them. There are three main forms:

So why bother with them? If they want to run away or hide, why not let them? If only it was that simple. Alas, you have to kill these things if you want to progress. Maybe they have something you really need; maybe they are blocking the door or path ahead; maybe they cause so much trouble when they do come out that you can't concentrate on anything except dodging their crazy gunfire, and would quite like them out of the way so you can get on with whatever it was you were trying to do. Most likely, though, is that they are a Boss or mini-boss who you have to get rid of in order to continue. Also, many of them if you "allow" them to run away WILL come back and attack you for massive damage (either from a quick direct attack or long range weapons) before taunting you to give chase again, wearing your health down anytime they're on screen.

Sometimes they can be fairly easy to catch if you time your move right, but often they fall into Demonic Spider territory, taking multiple hits despite the fact that it takes ages of sprinting, ducking about, or careful stalking just to get them once. If they are a common occurrence throughout a game, they can easily become classed as Goddamned Bats.

Occasionally, they are a not an enemy at all, but an item, creature, or person you have to catch, but not harm, in order to use, ride, or obtain information from.

If you're chasing the boss in a circle, it's Chasing Your Tail. Not to be confused with You Will Not Evade Me (which is when either you can stop the boss from doing this, or the boss can stop you from doing this). Polar opposite of the Advancing Boss of Doom, which chases you instead of you chasing it. Contrast Road Runner Pc where it's you who run circles around the boss, dodging their attacks while attacking on your own; being one may be the key of catching up with a Get Back Here Boss.

You may have this

start playing in your head while fighting some of these.