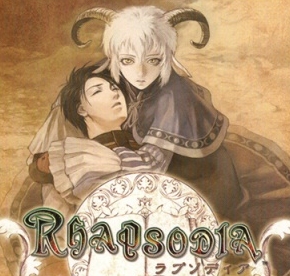 Suikoden Tactics (released as Rhapsodia in Japan) is a Gaiden Game in the Suikoden series and a sequel to Suikoden IV. The game tells the story of Kyril, the son of a Scarlet Moon officer, as he investigates and uncovers a massive conspiracy revolving around Rune Cannons. A complex web of political intrigue, rebellion, insurrection and a dying empire is further complicated by other agents of the Scarlet Moon with their own priorities regarding Kooluk and the Rune Cannons.

Tactics/Rhapsodia ties up many of the loose ends left over from IV, providing key information that helped the plot of the prior game make sense. Most of the cast returned, with a higher Stars of Destiny retention rate than even Suikoden II boasted, and several got fleshed out a fair bit more in the process, mostly via party chatter and optional campfire scenes.