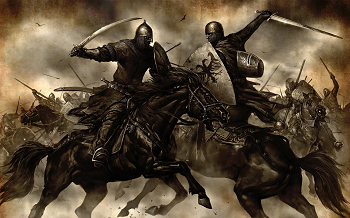 The Cool Horse has always been useful in fiction for heroes in all ages of literature, but fictional representations of the blessed steeds are often quite different to reality. In mounted stage combat, the horses are perfectly happy to just stand still next to each other while their riders (pretend to) hack away at each other, something of a contrast to the heat of battle. The riders/fighters have to simultaneously guide the horses into moving around each other so as to make it look like something's happening. Mounted combat is shown in varying degrees of realism, like in the rest of fiction. For help deciding how realistic a scene is, consulting the Useful Notes section on mounted combat may be helpful.

This is generally not much used in tabletop RPGs, at least not by player characters due to mounted combat training being something of a Useless Useful Skill to most general-purpose adventuring parties (which don't generally "just happen" to be dedicated cavalry units as well and in any case can expect to see a fair bit of action in places where mounts are either a liability or flat-out unavailable). Suitable NPCs in appropriate environments are a different story.

In Video Games, horsemen tend to be very expensive, fast moving and powerful units which are excellent if you can afford them... but also tend to come with one cheap opposing unit which can stop them.

And of course, nobody ever targets (or even accidentally hits) the horses themselves.