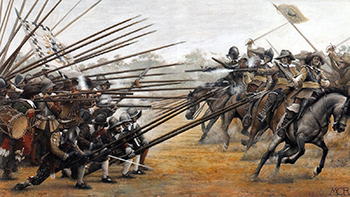 In some games, there are horseback units. Given their speed, it can be a hassle or worse to deal with them, moreso if they are heavily armored. Thankfully, there are weapons to deal with them, both rider and steed. Not one for the horse lovers. Very much a part of Tactical Rock–Paper–Scissors.

One of the things that makes these units so effective is the fact that compared to expensive cavalry units, they are usually dirt cheap. Taking down an expensive unit with one that cost pennies can be very valuable in a fight where every coin counts.

Historically accurate: Most such weapons are based either on polearms (spears, pikes, etc.) or camels. Horses are scared silly of anything resembling a pointy stick, and the longer the pointy stick the scarier it becomes. The fact that spears and pikes are really cheap and relatively easy to train with has historically made them excellent anti-cavalry weapons; indeed, the rediscovery of pike tactics by the Swiss and Dutch in the late Middle Ages is generally considered to be the real death knell for the age of knights (rather than gunpowder as generally assumed). Horses are also reputed to be scared or disoriented by the scent of camels; while this may not be true, reports of horse cavalry collapsing before camel cavalry are fairly consistent across time and place (from the time of Cyrus the Great through to the Arab empires, and in Central Asia as well).

Contrast Invulnerable Horses (although scenes involving such units may still pretty up their tactics by having them exclusively target the riders instead of the horses).