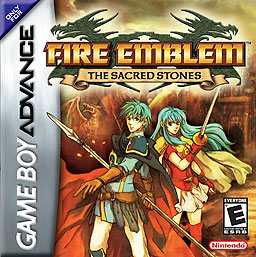 In an age long past... Evil flooded over the land. Creatures awash in the dark ride ran wild, pushing mankind to the brink of annihilation.
In its despair, mankind appealed to the heavens, and from a blinding light came hope.
—Prologue
Advertisement:

The story takes place on the continent of Magvel, as the southernmost country, Grado, attacks Renais. Renais had been allies with Grado for years and was caught completely off guard. The game itself starts with Renais' princess, Eirika, fleeing from her castle as it is overrun. She then goes off in her search for her twin brother Ephraim, and her childhood friend, Lyon, the Prince of Grado, in hopes of finding out why Grado attacked, and how to stop the war.

The story of the game can be easily divided into three separate parts:

The game shares some mechanics not seen since Fire Emblem Gaiden, the biggest of which is the ability to traverse the world map. Instead of going to the next story point immediately, the player can fight the monsters roaming the map or can visit monster-infested areas. This allows for Level Grinding, a luxury not available in most other Fire Emblem games. Additionally, it has a unique branching class tree, giving almost every unit multiple class options for promotion.

Fire Emblem The Sacred Stones is one of the ten Game Boy Advance games available to participants in the Nintendo 3DS Ambassador Program, having been given a limited rerelease to early adopters of the system for free on its eShop as of December 2011. As of January 2015 in the PAL regions and June 2015 in North America, it is also available on the Wii U Virtual Console.

The Sacred Stones is followed by the Nintendo GameCube game Fire Emblem: Path of Radiance, which takes place on the continent of Tellius in a different continuity.