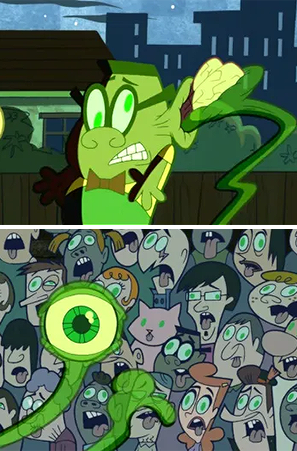 "And if at first they think it's strange, they won't think twice if they don't have a brain!"
"I'm not too fond of getting my hands dirty; instead, I take over the minds of others. They do everything I say, like good little puppets."
— Jov Leonov, Psi-Ops: The Mindgate Conspiracy
Advertisement:

Not to be confused with People Puppets — or a certain rock band from Phoenix — a Meat Puppet is a biological and (usually) living Host that has been taken control over by a Puppeteer Parasite, Body Snatcher or similar character, be it through science or occultic sorcery. The attempt to control a potential Meat Puppet in such a manner either results in Body Control, Mind Control or Demonic Possession. Compare to Empty Shell.

The purpose of a Meat Puppet is usually to act as a tool for the controller, ranging from basic slaves to intricately placed spies, sometimes also being used as a "Seeing Eye Dog" if the controller can remotely view through the puppet's senses. Generally, a Meat Puppet is a Faceless Goon, used as a Meat Shield, or simply becomes a brainwashed Mook that's expendable to a villain or antihero in control of it.

The following are special types of Meat Puppets chosen for specific purposes:

Not to be confused with the Forum Speak term for someone who posts on another user's behalf.