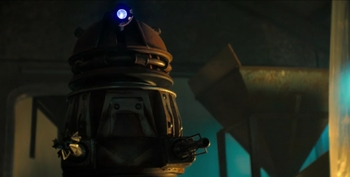 "What do you call this look, junkyard chic?"
"No matter how many times you try, no matter how long you wait... I will always be in your way, backed up by the best of humanity."
— The Doctor
Advertisement:

The one where we start the new year with an old "friend".

For the first time since 2005, the series forewent airing a Christmas special. Series 11's 10-episode length and October debut meant the obligatory special would simply tag along behind the new episodes, and there wouldn't be much of a cushion for the wait to next season. Chris Chibnall had been involved with the show long enough to see enough Christmas specials come and go, and as the newly-appointed showrunner, he wanted to spice things up a bit, so he went a slightly different route and went with a New Year's special.

In the ninth century, in England, three enemy armies fight together, at terrible cost, to defeat an incredibly dangerous enemy with powers beyond their imagining. To ensure the defeated enemy doesn't rise up again, its body is cut into three pieces, with each part entrusted to a custodian who is supposed to bury it in a remote corner of the world. Two of the custodians do their work, landing on a remote Pacific island and Siberia to bury their pieces and stay to guard, with their descendants still holding vigil in the present. But the third custodian is shot dead by a bandit in Yorkshire when his journey has barely begun, his burden left with him, forgotten in the dirt.

New Year's Day, 2019. Archaeologists Lin (Charlotte Ritchie) and Mitch (Nikesh Patel) come in to their dig site underneath Sheffield City Hall, since they don't have anything else to do that day. They're digging up the body of the third custodian. Mitch has heard of the now half-mythical battle that the custodians survived, but Lin doesn't believe that it happened. And when the third piece of the creature is placed under a UV light, it begins to awaken, calling the other two pieces to it from across the world, making it whole again so it can proceed on its mission: the subjugation of Earth. When the "artifact" disappears, Lin goes to look for it while Mitch stays at the workstation, and in the tunnel stumbles upon a very familiar grey squid-like creature on the wall, which she reaches for out of a disgusted curiosity...

As the viewers immediately realize the writers are making up for Series 11 not having any of the Doctor's traditional Rogues Gallery, we're then onboard the TARDIS, where the Doctor and her companions have been repeatedly celebrating the New Year in various times and places when the ship detects something going on back in Sheffield, something dangerous. The Doctor duly steers the ship back to Earth, where Mitch gets a surprise when the time machine lands right in front of him. Mitch and Lin explain that one of the artifacts is missing, and Lin mentions the squid-like thing she saw on the wall. The Doctor collects some of the slime left behind on the wall to figure out what she's dealing with, and they think the creature has gone into the water of the nearby sewers, so it could be anywhere. They disperse, with Lin and Mitch sent back home since the Doctor declares the dig site quarantined, as the time travellers go to Ryan and Graham's house.

Unfortunately the creature is not in the sewers — it's attached itself to Lin, and when she gets home, she tries to get rid of it, but it starts to control her, and forces her to use her computer to look up information on the current state of the Earth, data it can use to destroy the world. The creature eventually forces Lin to take to the road, eventually stealing a police car and uniform, to steal weapons and alien technology, specifically its own technology, the remnants at least. The Doctor and company only realize what they're dealing with after it's already started, however, when the TARDIS informs her via a DNA test that some things are inevitable; in this case, this is the Thirteenth Doctor's first encounter with her ol' "mate", a casing-less Fell Saltshaker.

In the middle of all of this, Ryan has to deal with his estranged dad Aaron turning up, trying to repair their relationship. Oh, and UNIT's operations have been disabled pending a financial review, so there's no help from that angle. And this isn't a normal Dalek they're facing: the Doctor, analyzing what the mutant is doing with its hostage, Lin, deduces it's an even more dangerous type; a reconnaissance scout, the first Daleks to leave Skaro and search for new worlds to conquer. The Dalek eventually uses Lin's body to construct a makeshift new casing for itself, and after the Doctor confronts it, it gets away and sets off to contact the Dalek fleet so the Earth will be annexed into their empire. When oblivious soldiers confront what they assume to be a mysterious new drone, they are slaughtered as they try to flee — not even a tank has any effect as while the casing may be new, the Dalek gun is as effective as ever.

As the Doctor and her friends and new associates try to stop their enemy alone, she realizes it's heading for the UK's main communications centre to send that invasion signal to the fleet. As the Dalek slaughters its way through the communications centre and begins preparing the signal, causing a nationwide Internet and phone service outage (on New Year's Day, when most people are at home using those services), Mitch's old books about the ancient battle against the Dalek provide the key to defeating it, using a microwave oven Aaron is trying to sell: immobilizing the armour and heating it up to roast the mutant inside. They arrive just in time to prevent the signal from being sent, but the mutant jumps ship before its casing is immolated and takes control of Aaron, holding him hostage in exchange for being returned to the Dalek Empire. The Doctor accepts the deal… but instead pilots the TARDIS to a supernova, where, as Ryan makes sure his dad isn't sucked out via a vacuum corridor, the Dalek is burned up in the death of a star.

Lin and Mitch are returned to their archaeological dig, and Ryan promises his dad he'll stop by and visit sometimes during his travels in time and space. As they set off, Yaz asks the Doctor where she's thinking of going, and she responds, "Everywhere."